A city of rich Moorish heritage, Seville is the cultural and financial center of southern Spain, and the site of numerous festivals throughout the year.

Your day-by-day itinerary now includes Triana. On the 12th (Sat), contemplate the long history of Royal Alcázar of Seville and then contemplate the long history of Plaza de España. On your second day here, pause for some serene contemplation at Iglesia De Santa Catalina, take a stroll through Triana, take in the architecture and atmosphere at Iglesia de San Juan de la Palma, then take a stroll through Barrio Santa Cruz, then take in panoramic vistas at Torre Giralda, and finally take in the architecture and atmosphere at Catedral de Sevilla.

For where to stay, other places to visit, photos, and tourist information, use the Seville visit website.

Bologna, Italy to Seville is an approximately 5,5- hour flight. You can also do a combination of train and flight; or drive. In settembre, plan for daily highs up to 33°C, and evening lows to 20°C. Finish up your sightseeing early on the 14th (Mon) so you can catch the train to Cordoba.
more less

Andalucía’s thousand-year-old city, Córdoba, was once the capital of both the Roman Empire and the Moorish Kingdom, representing an alluring mix of cultural and political history.

You've added Roman Bridge, Roman Temple, Alcazar de los Reyes Cristianos, and other attractions to your itinerary. Start off your visit on the 14th (Mon): take an in-depth tour of Calahorra Tower, then explore the ancient world of Roman Bridge, then take in the spiritual surroundings of Mezquita Cathedral de Cordoba, and finally steep yourself in history at Alcazar de los Reyes Cristianos. Get ready for a full day of sightseeing on the 15th (Tue): make a trip to Plaza de la Corredera, then appreciate the extensive heritage of Jewish Quarter (Juderia), then delve into the distant past at Roman Temple, and finally get engrossed in the history at Palacio de Viana.

To find maps, photos, other places to visit, and tourist information, refer to the Cordoba sightseeing planning website.

Traveling by train from Seville to Cordoba takes an hour. Alternatively, you can drive; or take a bus. Expect somewhat warmer weather when traveling from Seville in settembre: highs in Cordoba hover around 38°C, while lows dip to 19°C. Cap off your sightseeing on the 16th (Wed) early enough to go by car to Granada.
more less

Things to do in Cordoba

Granada boasts numerous well-preserved examples of exquisite Moorish architecture, not the least of which is the Alhambra, an ancient citadel and royal palace.

Your day-by-day itinerary now includes Monasterio Cartuja, Alcaiceria and El Banuelo. Start off your visit on the 16th (Wed): admire the striking features of Royal Chapel of Granada, take in the architecture and atmosphere at Basilica de San Juan de Dios, then hunt for treasures at Alcaiceria, then steep yourself in history at El Banuelo, and finally make a trip to Plaza de Isabel La Catolica. Get ready for a full day of sightseeing on the 17th (Thu): steep yourself in history at Alhambra, take in nature's colorful creations at Generalife, contemplate in the serene atmosphere at Monasterio Cartuja, then appreciate the extensive heritage of Mirador de San Nicolas, and finally wander the streets of Albayzin.

To see reviews, photos, more things to do, and other tourist information, refer to the Granada journey planner.

Traveling by car from Cordoba to Granada takes 2.5 hours. Alternatively, you can take a train; or take a bus. Traveling from Cordoba in settembre, you will find days in Granada are slightly colder (32°C), and nights are about the same (17°C). Finish your sightseeing early on the 18th (Fri) to allow enough time to drive to Malaga.
more less

Things to do in Granada 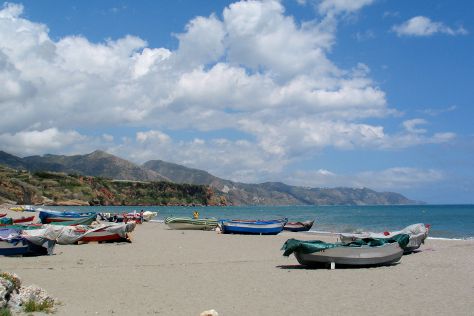 Capital of the Costa del Sol

Modern yet historic, Málaga is a lively city famous for being the birthplace of Pablo Picasso.

On the 18th (Fri), tour the pleasant surroundings at Burriana Beach, take in panoramic vistas at Balcony of Europe, then explore the historical opulence of Castillo de Gibralfaro, then get your game on at VRFun, and finally take a leisurely stroll along Puerto de Málaga.

You can drive from Granada to Malaga in 2 hours. Alternatively, you can take a bus; or take a train. Traveling from Granada in settembre, you can expect nighttime temperatures to be somewhat warmer in Malaga, with lows of 22°C. Finish your sightseeing early on the 19th (Sat) to allow enough time to drive to Ronda.
more less

Things to do in Malaga

Nerja
Find places to stay Sep 18 — 19:
Hotels on TripAdvisor
Homes on Airbnb
Highlights from your plan 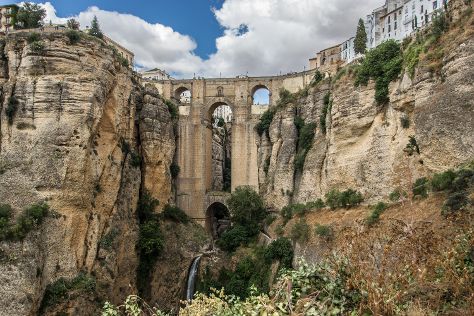 Renowned for its deep gorge, the quaint, whitewashed village of Ronda has preserved its charm as an Andalusian country village.

To find maps, reviews, more things to do, and other tourist information, go to the Ronda travel planning app.

Drive from Malaga to Ronda in 2 hours. Alternatively, you can take a bus; or take a train. In settembre, plan for daily highs up to 36°C, and evening lows to 20°C. Cap off your sightseeing on the 20th (Sun) early enough to go by car to Cadiz.
more less

Things to do in Ronda 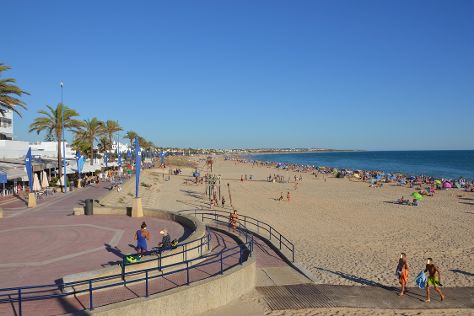 ©
Cádiz is a city and port in southwestern Spain. Kick off your visit on the 20th (Sun): snap pictures at Puente de la Constitucion de 1812, don't miss a visit to Playa Victoria, walk around Park Genoves, then stroll through La Caleta Beach, and finally take in the architecture and atmosphere at Catedral de Cadiz. Keep things going the next day: do a tasting at Bodegas Tio Pepe, enjoy the sand and surf at Playa de la Barrosa, make a trip to Yacimiento Arqueologico Gadir, then take in panoramic vistas at Torre Tavira, and finally contemplate in the serene atmosphere at Oatorio de San Felipe Neri.

For other places to visit, traveler tips, ratings, and more tourist information, you can read our Cadiz road trip site.

Drive from Ronda to Cadiz in 2 hours. Alternatively, you can take a bus; or do a combination of bus and train. When traveling from Ronda in settembre, plan for little chillier days in Cadiz, with highs around 31°C, while nights are about the same with lows around 22°C. Wrap up your sightseeing on the 22nd (Tue) early enough to drive to Seville.
more less

Things to do in Cadiz

To see other places to visit, traveler tips, and other tourist information, refer to the Seville road trip planner.

Traveling by car from Cadiz to Seville takes 1.5 hours. Alternatively, you can take a bus; or take a train. Finish your sightseeing early on the 22nd (Tue) to allow enough time to travel back home.
more less

Neighborhoods
Find places to stay Sep 22 — 23:
Hotels on TripAdvisor
Homes on Airbnb
Highlights from your plan